Insent.ai - Our Company Retreat for the End of 2019

I just got back from our company retreat in Mahabaleshwar. It was an incredible opportunity for me to recharge, refresh and now, reflect with all of you.

For those of you who are new to retreats or off-sites, they are basically a team getaway from the usual office environment. The agenda will largely depend on the company, their objectives, team size, structure, etc. But pretty much always, there will be some elements of team building, strategic planning, vision and value discussions.

As I always start, the big question is WHY a retreat?

For me, retreats achieve a handful of objectives:

The startup life can be a toil. Everyday, you and your team will get up and try to achieve something. But over a period of time, we will be so deep in the weeds that we forget to zoom out, take a look at where the world is going, why we’re building this, and how we will achieve whatever it is we are trying to do.

Have you ever heard/seen about Zombie startups? They are essentially startups that exist for a long time with no growth. The company is already ‘dead’, but the founders/executives just don’t know it yet. I’m not implying that retreats are the way to avoid zombie startups, but pulling yourself out of the daily weeds can put things into perspective, especially if you are heading in that direction.

We treat our retreats as an opportunity to take a hard look at ourselves. What the heck are we doing? Are we doing something that is moving the needle? What are our hits and what are our misses? Why did we miss what we missed and why did we succeed in the ones we did?

We assess the big picture, talk about the competitive landscape (NOT obsess about competition as these are two different things) and how we can be a unique company.

2. Getting the team on the same page

We are a pretty spread out team, just like most of the new gen startups. We have team members in Canada, US, Singapore, and India. As much as technology has made remote work possible, there are still gaps. Even the best emojis might not be able to convey the right emotions, the best graphics cannot convey the must-have values, and most importantly, not even the well-crafted pitches can convey the passion of the founders,.

We take our retreats as an opportunity to get everybody on the same page, and to do so, we discussed a handful of things:

Whether you do it deliberately or not, you are building the values of your company. Values are not boards that hang in your office, they are what you live by and what you make decisions based on.

I want Insent to establish our values deliberately, and so we brainstormed and discussed in detail the values that we are already living by, and then formalized it. I’ll be writing a blog post detailing our values soon.

b. Vision of the company

Founders have big vision and it might keep evolving. It is not enough that you share that vision once. You have to continuously communicate and re-iterate on the vision so that the entire company is clear about it.

c. What are we building and for whom?

Since our retreat has our entire dev team, it was critical for us to speak about ‘what’ we are building. It is not about the code we write or the features we build; it’s beyond that. We discussed the regular day of our customer, the decision-maker, and of course, the end user. We spoke about how Insent should help alleviate their problems and be better at what they do, and how they translate to features, code, and UI/UX.

Again, our team is diverse right now. But we want to continue to make it as diverse as possible. One of the challenges in having a diverse team is that it's easy to have small rifts and gunny bags that become smoke and fire later on. So, at the crux of it, I believe that team building is all about understanding where people are coming from, what their background is, how they think, and etc.

For this, it is important to open up and share personal details about oneself to others. Of course, this can be an uncomfortable exercise.

So we did an activity called ‘Flow of Life’ where each of us had to imagine our life as a river.

1. On one side, pick two really positive events in their life

3. One person who has influenced them a lot in their life

Since I’ve learned to become quite comfortable being vulnerable, I opened it up with my story which has enough ups and downs.

The activity which was supposed to take two hours took four instead. Our team dived deep into their life and became super open about their life events. It was an enlightening experience for me too. Though I knew a lot of points since I have interviewed them (our interview process has a lot of ‘about life’ elements in it), it still taught me a lot about my team.

All of us know the ‘all work and no play’ proverb. We had one day pretty much dedicated for outing and fun activities. We did a small trek, some shopping, drives, street food, and sightseeing. Pictures tell the story better; so here we go: 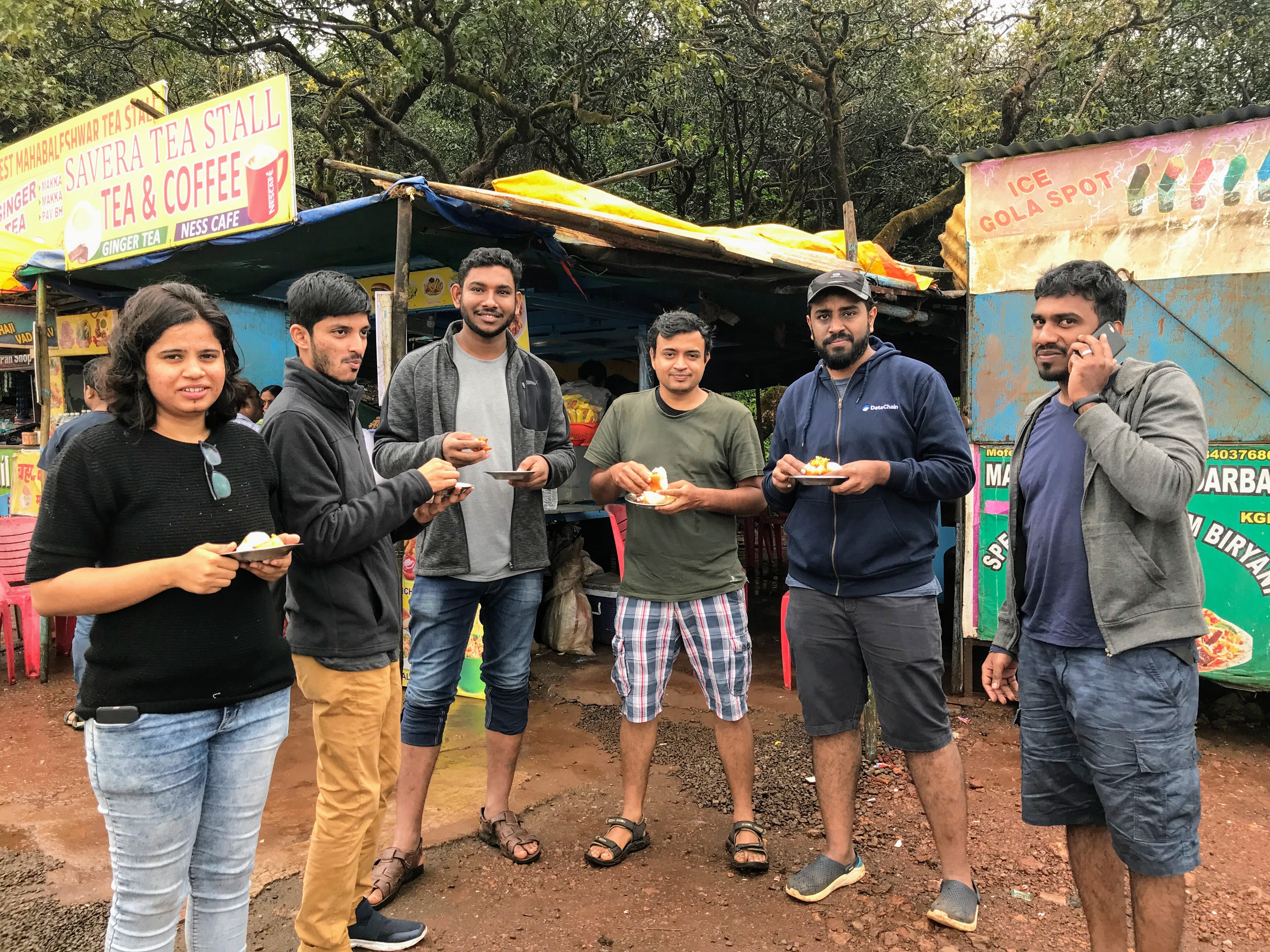 Here’s how we achieved the objectives I described above:

My co-founder, Prasanna and I, worked on the agenda ten days before the retreat and shared it with the entire team so that all of us are clear of what we are trying to do. I think setting this expectation upfront is important in aligning your team, and also an opportunity for them to chime in.

Involvement from the team:

There were several elements of the trip that we completely organized by the team. Our team member Ijas took the initiative to pick the place, Mahalbaleshwar, which turned out to be a great location. I didn’t even know such a place existed. Swati took care of outings. Tony, Jerin, and Ijas took care of renting of car, and Prasanna took care of our accommodation and groceries. So, by all means, it was a team effort. And my primary (and mostly only) responsibility was setting the agenda.

It is important to have all of the above said amenities in place, however, what’s equally, if not more important, is setting some ground rules by which the retreats will be ‘governed’.

If there is one rule, then it had to be the ‘safety net’ rule. It just means that everyone is safe to speak their minds during the retreat. There will be many sessions on feedback about product, company, people etc. If team members are worried about repercussions, then retreats wouldn’t work at all.

A few simple examples are::

There could be more rules that you can come up with that'll make the session more productive.

One of the most fascinating things that happened during retreats without any plan was our late night chats. Besides the first night, we huddled every night in the living room and chatted, sometimes argued, about random topics, about other companies (WeWork came up multiple times, obviously). On average, we were going to bed at 2 or 3 a.m. and then starting the day again at 9 a.m. the next day.

We didn’t want all of the offsite to be discussions. Imagine having four days of discussion with developers. Devs want to build. That’s what makes them happy.

There was this new concept that we see as the future iteration of our platform, but since we’re focused on the present, we didn’t want to spend cycles on the new plan during our regular hours. So we used the retreat as an opportunity to host a hackathon. We scoped out the idea to build a minimal version of it in 36 hours.

The idea was to create something minimal so that I can start showing it to potential customers and mentors to collect feedback and validate the concept viability. The team was very quick to build me the exact stuff I was looking for based on a simple (read shitty) powerpoint wireframe that I shared with them.

It was a very collaborative effort where product, sales, tech, UI/UX etc came together in one room and built it out very quickly. Again, for a team as remote as ours, it is important to have such ‘same room’ collaborations once in a while.

Takeaways from the Retreat

If you are planning an offsite/retreat for your startup team, here is a simplified version and template for an agenda Insent Offsite Agenda.

This was our second formal retreat. The first one was in Idukki, Kerala. That one was much less formal. There were just four of us during that time. Seeing the enthusiasm of the team, we have collectively decided to keep doing retreats every quarter as much as possible. As the company matures, we will obviously make changes.

For the next one, we are thinking about having an extended co-work, co-live retreat in Bali. This will be in the month of February.

Loved the retreat story? Want to be part of our Insent family? We are always looking for amazing people to join us. Write to us at careers@insent.ai

Arjun Pillai is the Founder & CEO of Insent.ai, the human-first conversational marketing platform that connects B2B marketers to their target prospects the moment they land on their website. He believes that bots cannot automate the human connection our prospects crave on their path to purchase.

What do you think?

We'd love to hear your thoughts.